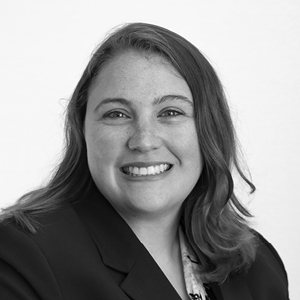 Jessica L. Mullenix Woodward, Esq., is a senior transaction manager for Independent Director services with CSC Global Financial Markets. She works directly with clients to assist in various commercial transactions. Jessica analyzes the terms of an entity’s organization documents to ensure the governing documents comply with the requirements of a special purpose remote entity—as well as determining the role in which CSC will play within the entity—and negotiates said terms as required. Since joining CSC in 2019, she has facilitated the closing of multiple transactions requiring Independent Director services.

Previously, Jessica served as a bankruptcy attorney at multiple law firms, focusing primarily on consumer bankruptcy matters. From 2016-2019, she served as Delaware bankruptcy attorney at Orlans PC, representing creditors in bankruptcy matters. She successfully prosecuted various motions and defended against various adversary proceedings on behalf of creditors in the Delaware Bankruptcy Court. From 2010-2016, she represented debtors in consumer bankruptcy cases at both the Law Offices of Doroshow, Pasquale, Krawitz & Bhaya, and Billion Law.

Jessica earned her B.A. in communications from the University of Delaware, as well as a J.D. from Widener University School of Law. She was admitted to the Delaware State Bar in 2010.

The CSC family of businesses

A provider of Registered Agent, UCC search and filing, compliance and entity services

Market's only single system for the corporate tax life cycle

Form and incorporate your business in a few simple steps